Squashing Our Way Through Summer

As I suspected, it is powdery mildew on summer squash plants, a fungus that affects a variety of plants in humid and temperate climates. They start as powdery white spots on the leaves, and over time spreads and kills the plants. Apparently, spraying diluted milk on leaves can combat it. No one is sure of the mechanism that milk has, but it is worth knowing for next year. At this 3rd week of squash harvests, I, the restaurants I bring squash to, and all my neighbors are ready for the end of squash. I have yet to make zucchini bread, but it’s about to begin. Did you know Zucchini chips (Snapz) are 2 dollars for less than half ounce?

The Crooknecks Just Keep On Coming

This pattypan squash is supposed to have a light green tint, but these albinos are almost too pretty to eat. These plants had not grown well from the beginning. Though there are many flowers, not too many formed squashes. The few I found were impressive in taste. Grilled simply with olive oil, they are super sweet, and have a milder flavor than zucchinis.

The lemon cucumbers started in earnest. I have taken to leaning cattle fencing (very large wire nets) against several stakes and pulling the vines off the foot-high grass. It isn’t the neatest sight, but it did help me find some hidden fruits. The varietal is shaped like a lemon and when fully mature are yellow as well. They are a mild cucumber with very little of the bitter compound cucurbitacin. 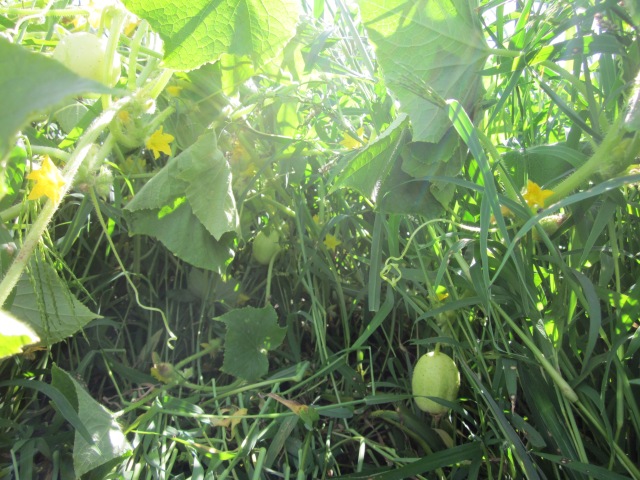 I can’t believe it is almost time for the second green bean row. Despite some deer damage, I see many flowers developing. I tried out a tractor-drawn implement over the green beans this weekend in an effort to weed on either side of the plants, and damaged a few plants. Note to self, try out new implements on younger seedlings.

1 Response to Squashing Our Way Through Summer